In what could be best described as a sign of our times, Nissan Canada and a Newmarket dealer have issued separate apologies for an image that was printed on a flier, deemed “inappropriate” because it showed two people shaking hands.

Sadly, we live in a world that's still struggling to contain the health crisis, where social distancing measures and avoidance of all physical contact have been determined as the best ways to prevent infection. This means that an image that wouldn't have raised an eyebrow precisely one year ago is drawing ire on social media.

You can see it in the tweet at the bottom of the page, together with one such negative message. The photo was used by a Nissan Canada official dealership, Newmarket Nissan, and it shows a man and a woman shaking hands, presumably after concluding the transaction of a new car. Shaking hands was, until not long ago, the customary way to finalize a deal, after signing on the dotted line.

While whoever put together the flier made sure to Photoshop masks on both the man and the woman, they were oblivious to the fact that they shouldn't touch hands. Hence, the minor controversy.

Consequently, the photo has been removed. Newmarket Nissan says that, despite what the image indicates, it takes all safety measures necessary for the benefit of staff and customers alike. In other words, it was just a fluke, don't read too much into it.

In a separate statement to CTV News Toronto, Nissan Canada emphasizes that point: the image used was a stock one and no harm was ever meant by using it.

"We have contacted the dealership and they are removing it from their store immediately given the conflicting message and inappropriateness of the image," Nissan Canada adds. "This was not intentional and the dealer has apologized for their actions." 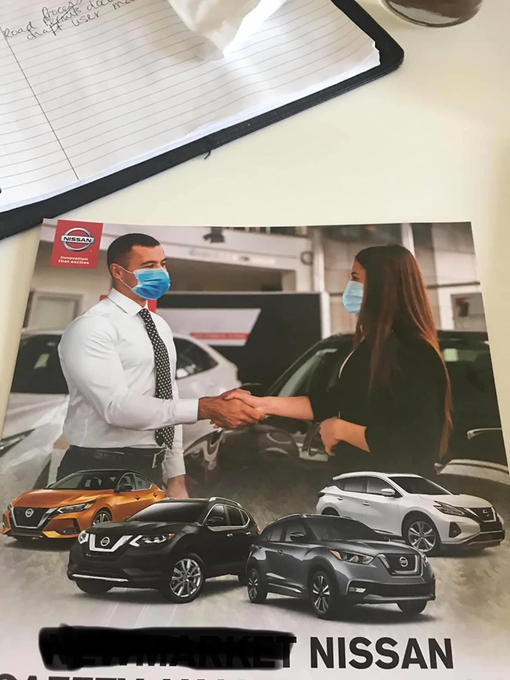