California BMW owner Bryan Hillman faces two lawsuits from neighbors who are upset with his allegedly aggressive driving and revving engine. They claim that he breached their "quiet enjoyment" of their property, Tire Meets Road reports.

Hillman posted a portion of both lawsuits on Twitter. One neighbor is asking for $5,000 in damages, and the other wants $10,000. Both claimed that this reckless behavior had been happening for years. One of the complaints also alleged verbal abuse.

Obviously, we don't live near Hillman, so we can't attest whether his neighbors have an argument about his allegedly reckless driving. Although, it might be telling that the tweet immediately before posting these lawsuits shows him doing a smokey powerslide through a culdesac. Whether or not this is common behavior, the clip doesn't seem to help his case.

Since receiving the lawsuits, Hillman started selling decals with the message F--- Susan  (uncensored in the version for sale). This is a reference to one of the people suing him.

The California Civil Code gives homeowners and tenants the right of quiet enjoyment on their premises. This includes persistent disturbances, including "ongoing disruptive nuisances, noises or behaviors, such as barking dogs or loud music late at night," according to Apartment Guide.

If Hillman is really sliding, doing burnouts, and revving the BMW's engine as often as his neighbors claim, then that might rise to the level of an ongoing disruptive nuisance. This will be up for a judge to decide.

In general, there's nothing wrong with taking a spirited drive, but there's no need to roll through the suburbs bouncing the engine off the rev limiter and drifting through the culdesacs. Go find a winding road in the country and enjoy the scenery from behind the wheel.

$2k a year for loss of quiet enjoyment of their home BAHHAHAHAHA THIS WOMAN IS SO DELUSIONAL. Keep in mind I don’t have an HOA lol... https://t.co/fKF4euRmh8pic.twitter.com/dkiPWravPP

Atleast my OTHER neighbor behind me only wants 5k pic.twitter.com/PAKZPyYjo1 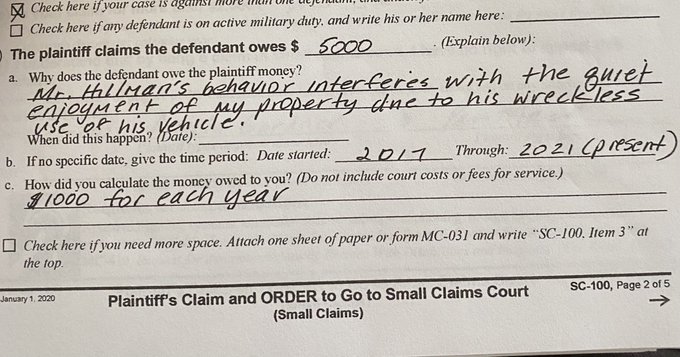