Formerly known as the Sedona, the fourth-generation Kia van may revitalize its category.

Kia is on a tear to rebrand itself as a purveyor of modern, stylish vehicles, both via a new logo and cohesive global naming strategy. We saw the latter with the debuts of the Optima-replacing Kia K5 last year, as well as the larger K8 sedan (don't call it a Cadenza). However, the first new vehicle to receive the company's new badge will be the 2022 Kia Carnival minivan, which arrives this year to replace the Sedona. 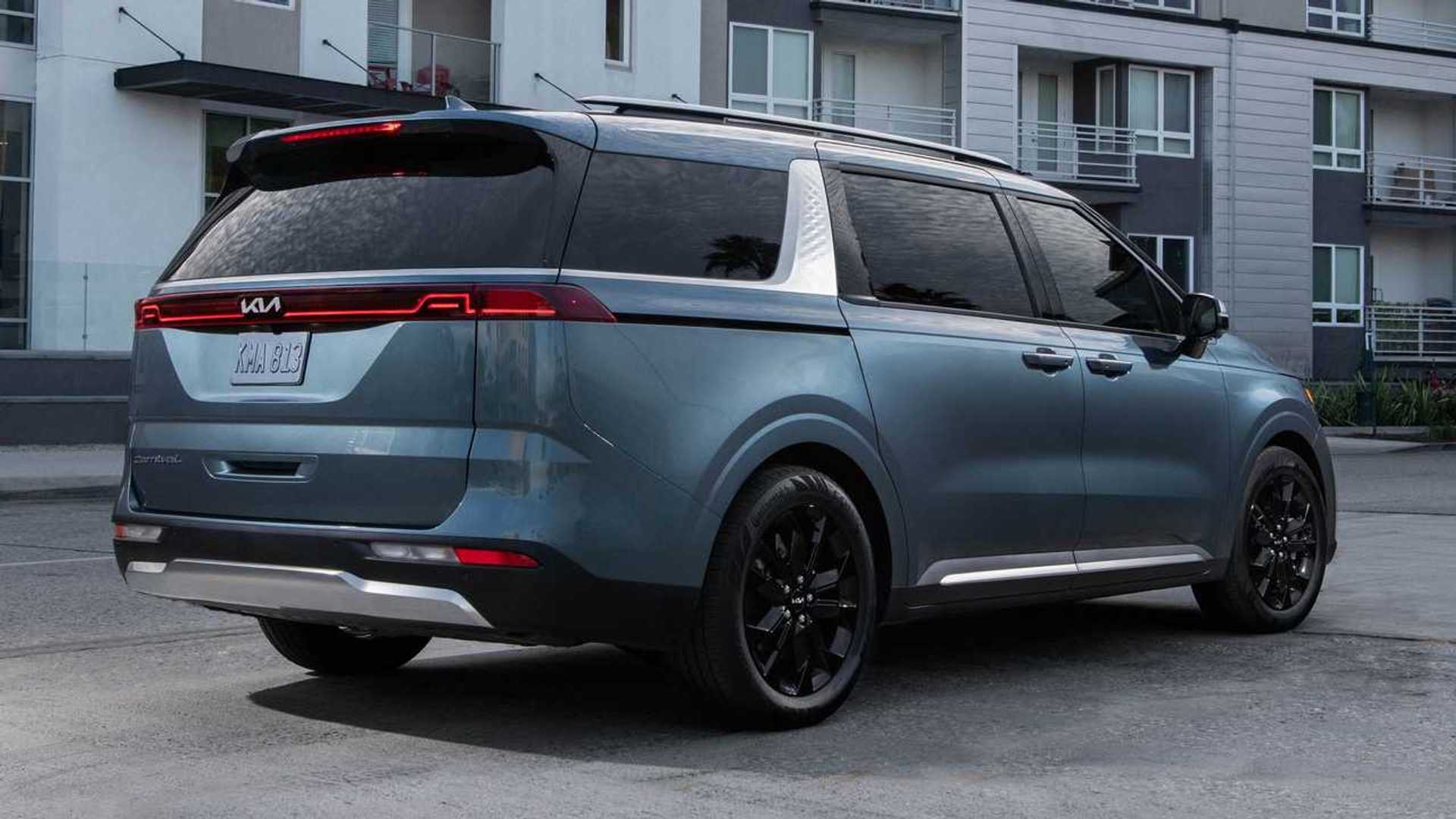 Adopting a name that Kia has used on its global-market minivans, the 2022 Carnival is targeting crossover shoppers even more intently than its predecessor with bolder styling that might help it steal a few customers who might otherwise find themselves in a two-wheel-drive Honda Pilot or Ford Explorer. Once in the bag, those shoppers should appreciate the van's long list of standard active safety features, spacious seating for all three rows, and available second-row "lounge" bucket seats that look like they're cribbed from a luxury coach.

The hood still slopes downward in that distinctly vanlike way, though its leading edge now meets the grille to eliminate a fussy bodyline. Counteracting any frumpiness is the work of a horizontal accent line that runs between the thin head- and taillights, visually flattening the hood and disguising the sliding door channels along the way (other minivans put the door mechanisms on the lower edge of the rear quarter windows, which looks better).

Black A-, B-, and D-pillars give the roof a floating appearance, but this tired trend is updated with textured brightwork on the cantilevered C-pillar, giving the Carnival distinctive, premium styling. Instead of trimming the entire beltline in that aluminum-look material, it only stretches around the rear quarter and hatch glass. The baubles and thin, downturned LED taillights impart more than a little Lincoln Aviator in the van's rear styling. 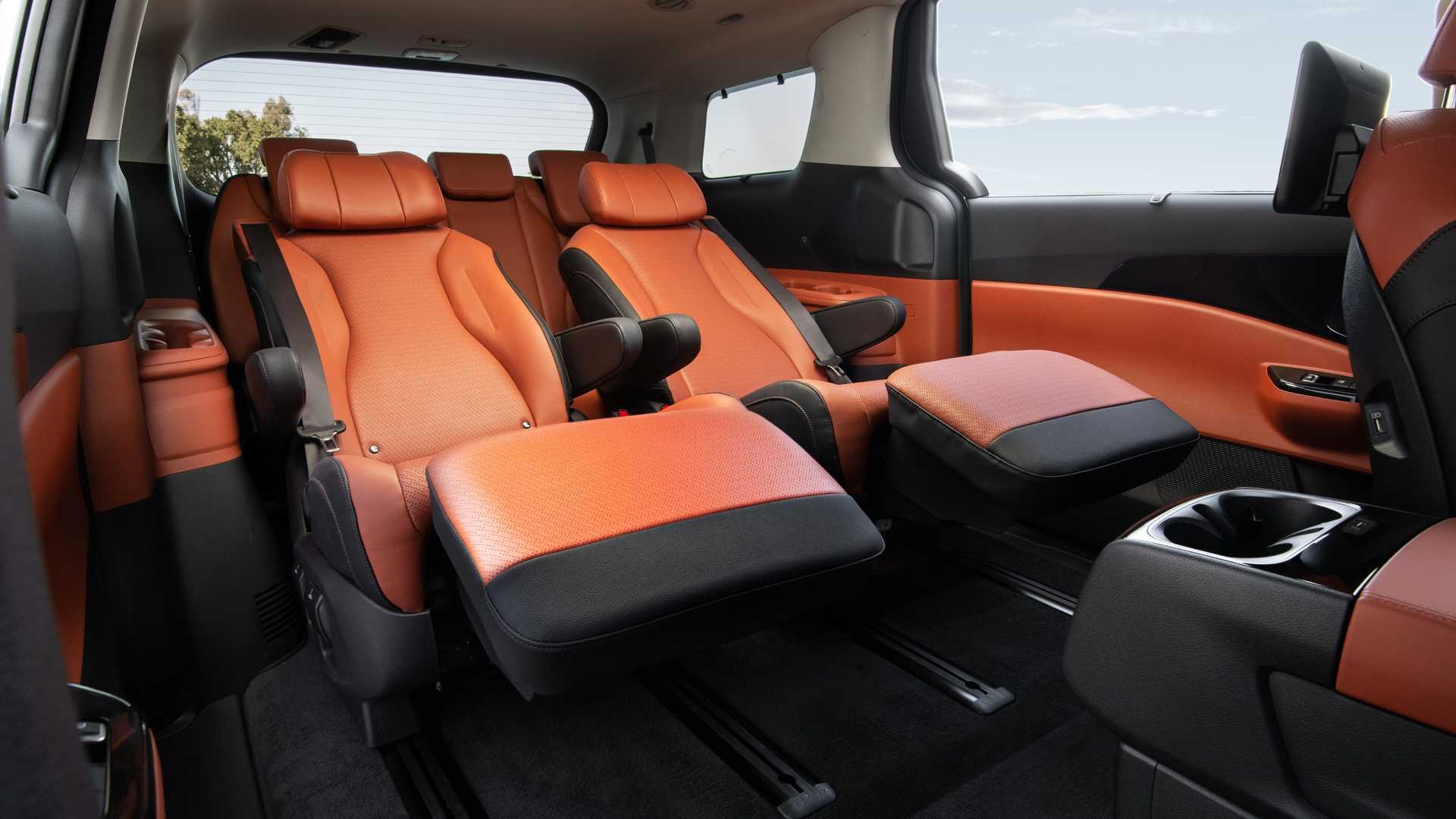 Inside, it's textbook Kia, with a wide dashboard and lots of horizontal elements. An available digital instrument cluster and infotainment touchscreen, both measuring 12.3 inches, are useful updates over the old Sedona – conventional gauges and an 8.0-inch screen are standard. A broad center console does away with the useful front pass-through found in other vans, but it does add storage and crossover style. Meanwhile, this photo model's distinctive two-tone colorway brings lots of visual flash, even in the second- and third-row seats.

Fast-Lane Family
In spite of Kia's desire to steal SUV shoppers into the minivan fold, the Carnival arrives with only one powertrain option: a 3.5-liter V6 producing 290 horsepower and 262 pound-feet (216 kilowatts and 355 newton-meters), with power going only to the front wheels via an eight-speed automatic gearbox. The Toyota Sienna and Chrysler Pacifica offer all-wheel drive, and given Kia's crossover-minivan predilections, we'd have maybe expected the same from the Carnival.

Still, it's the same engine and transmission found in the Telluride, and we have little to complain about in that application. The Carnival also has more power and torque than the Sedona it replaces, whose 3.3-liter V6 already had an adequate 276 hp and 248 lb-ft (206 kW and 336 Nm). The van can also tow up to 3,500 pounds, good enough for a couple Jet-Skis, a tent trailer, or some dirt bikes – families with speedboats and Airstreams may want to look elsewhere, however.

Helping the Carnival make the most of its muscle is a stiffer, lighter architecture known as N3. The platform makes extensive use of hot-stamped and ultra high-strength steel, improving torsional rigidity without adding weight. More sound insulation yields a quieter cabin, while more aerodynamic bumpers, mirrors, and wheels allow the engine to push the van through the wind with less resistance.

Carpool Credentials
The cabin isn't only quieter, it's also larger than before. Kia didn't break down interior measurements specifically, but the 2022 Carnival offers 168.2 cubic feet of passenger room, relative to the outgoing Sedona's 165.8 cubes. With the flat-folding third-row seat stowed and the second-row seats removed, the Carnival can haul a best-in-class 145.1 cubic feet of cargo in LX, EX, and SX form, up 3.1 over the Sedona.

Other Carnival variants get their own tricks, including a sliding center position on models equipped with the second-row bench. This center seat moves forward to allow the front-seat passenger easy access to a baby or child riding there. It can also convert into a table surface for rear-seat passengers. Family-friendly features include standard hands-free power sliding doors and an available hands-free power liftgate. EX, SX, and SX Prestige models get a night vision rear seat camera to allow parents to keep tabs on kids, an intercom that pipes conversations into the third row, and infotainment that can take back-seat voice commands.

Dual-screen rear entertainment comes on the SX and SX Prestige, incorporating wireless Apple CarPlay and Android Auto for rear-seat passengers. The Carnival's infotainment system can also connect to multiple Bluetooth devices, charging them via a maximum of nine USB ports and two 110-volt power inverters, spread across all three rows.

Kia hasn't announced pricing or fuel economy for the forthcoming 2022 Carnival, but we expect it to cost a little more and drink a little less than the Sedona, which starts at $30,400 and rises to $41,500 and gets 21 miles per gallon combined. We expect the modernized Carnival to match the 22 mpg of the Honda Odyssey and non-hybrid Chrysler Pacifica, though none can catch the 36 mpg offered by the hybrid-only Toyota Sienna. Regardless, the Kia van should offer lots of value by way of a starting price around $31,000 and the company's famous 10-year powertrain warranty. The 2022 Kia Carnival arrives in dealers this spring.